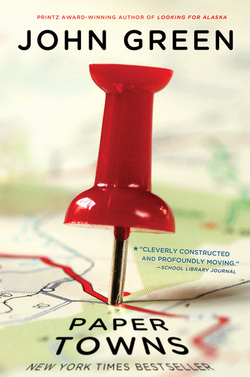 Following the release of the film based off the book The Fault In Our Stars written by John Green, comes another film adaptation of a novel written by the author. Paper Towns, published on October 16, 2008 was the third book published by John Green. It’s narrated by Quentin “Q” Jacobsen, a senior in high school who is the admirer of his former childhood friend, Margo Roth Spiegelman.

Q is an average teenager with a quirky group of friends, but things change when Margo comes to him one night for help enacting revenge. The book follows Q through his last weeks of high school as he searches for clues to solve the mystery that Margo leaves, once she disappears.

Paper Towns is filled with wild adventures taken by Q, Margo, and Q’s friends, Ben and Radar. The clues left in the story tend to be slightly confusing when the characters discover the connections they have to Margo. In the end, it all adds up, though in a very intricate way.

This was the first book I’ve read by John Green, and it has always been my favorite. The characters in the book all have an interesting feature to them, whether it be “honeybunnies” or a record breaking collection of black Santas. Margo throughout the story is kind of an enigma, going on wild adventures, and not being scared of what she’s leaving behind, “Margo always loved mysteries. And in everything that came afterward, I could never stop thinking that maybe she loved mysteries so much that she became one.” (8).

The book also has an interesting outlook on people, the way they live, and people mentality, “’You said… When the guy died, you said maybe all the strings inside him broke, and then you just said that about yourself, that the last string broke.’ She half laughed. ‘You worry too much…’” (71).

Even though it is a book for young adults, there are discussions of sexual content in the book. The book keeps it limited to discussions though.

Finding ways to describe the book and fully explain how amazing I believe it is is extremely difficult. I would definitely recommend it to anybody who has been a fan of John Green’s writing in the past, and is planning on seeing the film adaptation, or anybody that has not read anything from the author and needs something new to read.